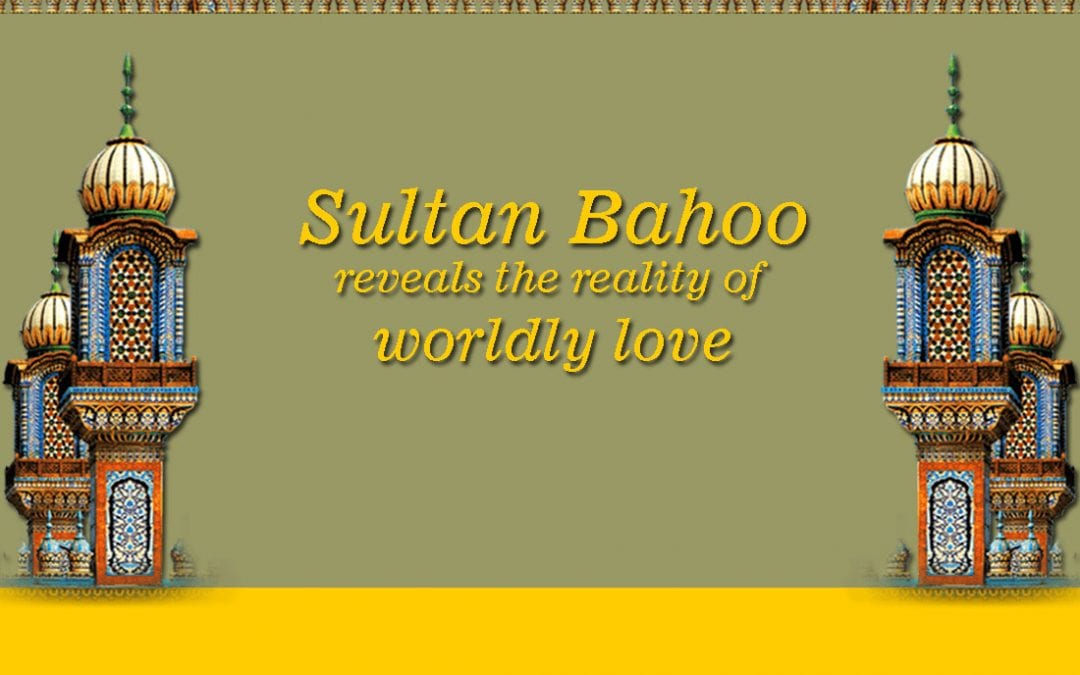 the Reality of Worldly Love

Sultan Bahoo writes about worldly love in his book Ganj-ul-Asrar:

Worldly love is like a killing poison. Just as the poison kills the man, similarly worldly love destroys faith. (Ganj-ul-Asrar)

Generally, the abundance of wealth and riches is considered worldly love, but the Saints define the worldly love as:

Everything that distracts or diverts the attention away from the remembrance of Allah towards itself is worldly love. As the Holy Prophet sall’Allahu alayhi wa’alihi wasallam said:

Meaning: Anything that diverts you away from Allah by attracting you towards itself is your idol. (Sham-ul-Fuqara)

That is to say, every such thing, thought and action is worldly love whose aim is not Allah’s pleasure. Thus, the meaning of worldly love may differ among humans. Ultimately the acquisition and love of anything that distracts the seeker away from Allah is his world. This worldly love could be in the form of constant desires or acquiring relations or following the desires of inciting innerself.

The reality of human is that he gains Divine vision and closeness in the realm of Divinity by annihilating in ardent Divine love. But worldly love attacks his inward intensely in the form of desires of inciting innerself. Resultantly the soul darkens and becomes unfaithful due to complete deviation away from Allah.

The perfect spiritual guide of the era Sultan-ul-Ashiqeen clarifies it excellently in his famous book Shams-ul-Fuqara:

There are two doors to the inward. One at the top and the other at the bottom. The door at the top is connected to physical body and the bottom one is connected to the soul. A Satanic whisperer lives around these doors by building the web of a spider. It blows evil whispers in the inward in the same way as a dragon does. The appearance of this Satanic whisperer (world) is like that of a dragon and its tail consists of poisonous thorns with which it poisons the inwards and creates darkness in the soul. (Sham-ul-Fuqara)

The seeker of Allah is the one who never separates from Allah even for a moment and gets rid of covet and worldly love forever because indulging in useless affairs darkens the inward. Moreover, such a dark inward is neither benefited by sermons and advices nor by reciting the verses of Quran, Hadiths, or sayings of the Saints because it has died due to the love and greed of world which compel a person to adopt undesirable deeds. (Mohkim-ul-Fuqara) 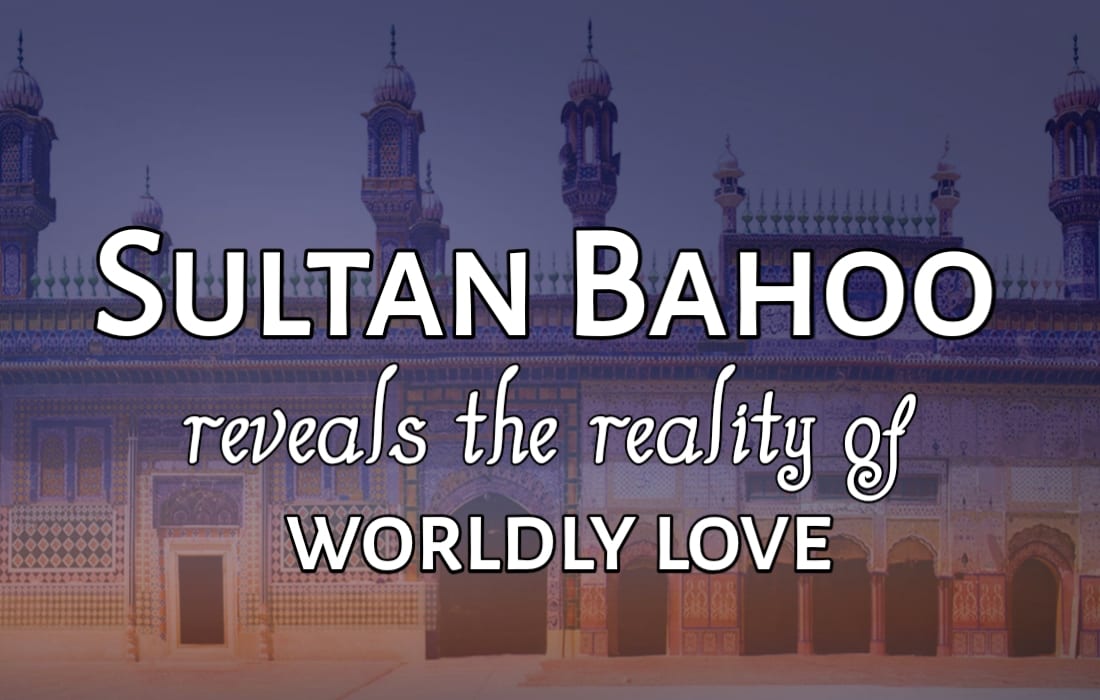 Explanation: The world is partially cursed and the worldly people are cursed entirely who are involved in its love instead of the love of Allah. Those who do not sacrifice all their wealth, life, and worldly relations for the sake of Allah and to find His goodwill, they deserve punishment in this world and the hereafter.  This worldly love gets the man involved in greed and avarice to such an extent that a father gets ready to kill his son for it. O cunning world! May you burn! The people who renounced this cursed world for the sake of Divine love, would be the successful ones and the great achievers in the hereafter.

Just as one drop of poison makes the whole pond poisonous, similarly even a little poison of worldly love causes death to the soul.

Abandoning worldly love does not mean to abandon the rights of human beings and turn away from life’s needs by exiting to jungles, mountains, isolations, and deserts. Even the Holy Prophet did not do that and neither did he command to adopt this approach. In fact, it is a saying of Holy Prophet:

Meaning: There is (no room) for monasticism in Islam.

That is to say, the way of acquiring Divine vision and closeness for the umma of Prophet Mohammad is not through monasticism but by fighting in the way of Allah.

Undoubtedly the Holy Prophet introduced greatest Islamic system by living in the world that is a source of guidance for each human till the doomsday. The teachings of Holy Prophet sall’Allahu alayhi wa’alihi wasallam are in fact Faqr.

How to live in this mortal and materialistic world?

Reality of worldly love in the Holy Quran

In the Holy Quran, Allah Almighty has expressed the reality of worldly love in several  places:

Meaning: Yet you go for the (pleasures of) the worldly life (instead of turning towards Allah, whereas (the comfort and pleasure of) the hereafter is preferable and everlasting. (Al-A’la 16-17)

Meaning: And, (O people,) the life of this world is nothing but sport and pastime and the home of the hereafter is the only (true) life. Would that they knew (this secret)! (Al-Ankabut 64)

Meaning: O believers! Let not your wealth and your children make you neglectful of the very remembrance of Allah. And whoever does so, it is they who are losers. (Al-Munafiqun 9)

Meaning: Your greed for materialistic wealth and the superiority complex has made you negligent (of the hereafter). (Al-Takathur 1)

That is, you have forgotten the hereafter while being immersed in gathering this world.

Meaning: Then he who transgressed the limits. And preferred the life of the world (to the hereafter), hell will truly be (his) adobe. (Al-Nazi’at 37-39)

Purpose of revelation of Holy Quran

It is evident from the verses of the Holy Quran that Allah created this world for the trial of humans and not so that they  become ignorant of the hereafter by involving in the luxuries of the world. The objective of revelation of Quran is to warn humans of the sufferings and reality of this world. Thus, the man could understand its tricks and hence prepare for the hereafter.

Reality of worldly love in the Hadiths of Holy Prophet

Following are some of the sacred sayings of the Holy Prophet about worldly love:

The Holy Prophet asked Umar: What made you cry?

Umar replied: O Messenger of Allah! Caesar and Khosrau are leading their lives in plenty whereas you are Allah’s messenger (and still living an austere life).

The Holy Prophet held my shoulder and said: live in this world like a traveler. (Bukhari)

It is clear from the aforementioned Hadiths that this worldly love is a poison. Tasting even a bit of this tyranny causes such death to inward of a seeker that he never yearns Allah’s remembrance.

Warnings to the lovers of materialistic world in the Holy Quran

Allah says in the Quran:

Meaning: And whoever turns away from My direction and guidance (i.e., remembrance and advice), his inwardly sustenance will be narrowed, and We shall raise him blind on the day of resurrection as well. (Taha 124)

Meaning: And those who deny Our revelations, We shall soon lead them gradually towards catastrophe in such an imperceptible manner that they will not even notice it. (Al-A’raf 182)

Ones who seek Allah’s vision and closeness never pay heed to this mortal and materialistic world. Moreover, they always remain involved in obeying Allah and His Prophet. This is the reason the Companions of Holy Prophet fully adopted Holy Prophet’s teachings of Faqr. Resultantly they enlightened their inwards in such a way that the luxuries of this world could not amaze them even a bit. Till today these personalities are known to be the ardent lovers of the Holy Prophet.

Worldly love has always been tyrant to the beloveds of Allah

What is the purpose of creation of this materialistic world after all?

This world and everything in it is mortal and Allah created them only for the trial of human so as to separate the pure ones from the impure in this test of ardent Divine love.

After coming into this world, the example of human is that of a traveler who is wandering in a desert (worldly love) where his need (of Divine vision and closeness) cannot be fulfilled. That is to say, his inwards gets trapped in worldly love and desires of innserself  and becomes ignorant of the desire of Allah’s vision and closeness. To quench his thirst and to come out of desert he would need a guide who is aware of the path to his real home (realm of Divinity). Without a guide all his efforts will go wasted.

When the traveler successfully takes himself out of this desert with efforts under the guidance of (perfect spiritual) guide then he would gain eternal life (Allah’s closeness in the realm of Divinity) Otherwise wandering in the desert will cause him death, his ending will be terrifying and his body will be consumed by the desert animals.

Company of Fakirs protect the seeker’s inward from worldly love

Allah says in the Quran:

Moreover, Allah says in the Quran:

Who is an oppressor? It is him who has ignored the teachings of Holy Prophet i.e., Mohammadan Faqr. Indeed, he is an oppressor towards his innerself and soul. He is a follower of world and Satan and has turned away from the invocation of Ism-e-Allah Zaat. Undoubtedly this ignorance will be nothing but a source of embarrassment for him in the hereafter.

Indeed, Allah has written the destiny of human, but he makes his own fate through his beliefs and decisions. If he remains in the limited circle of his beliefs, does not trust Allah, makes materialistic world his idol, then how is this possible to have right beliefs without asking for Allah’s help? When thoughts are trapped in worldly love then how can he make right decisions? When the decisions are not right then ultimately result is not right either. Later, there remains nothing but regret.

Shaikh Abdul Qadir Jilani and the reality of materialistic world

Thus, if one desires righteousness for himself then he must make himself fully aware of the deceptions of the worldly love so that this killing poison doesn’t destroy his faith. No human can ever remain safe from this poison of worldly love until he adopts Holy Prophet’s teachings of Faqr. These teachings of Faqr are sharia, tariqa, marifa and haqiqa (four stages in Sufism). By leaving even one of them, he would not be able to save himself from torment after death. Neither then he can make himself deserving of Holy Prophet’s intercession on doomsday.

Whose company to adopt in the present era

After the Prophethood ended, the Companions of Holy Prophet, and then  Tabi‘ūn Tabi al-Tabi’in (next generation of Companions) and after them perfect Fakirs are spreading beneficence of teachings of Faqr in its true form.

Sultan ul Ashiqeen Sultan Mohammad Najib ur Rehman is the perfect Fakir and the spiritual successor of Sultan Bahoo in the present era. He is on the footsteps of the Holy Prophet sall’Allahu alayhi wa’alihi wasallam. Thousands of people have sanctified their inwards from the poison of worldly love by accepting Islam on his hands. And numerous true seekers of Allah are covering the journey of Divine vision and closeness.

It is impossible to describe the grandeur and spiritual status of Sultan ul Ashiqeen in words. It is a humble prayer  in Allah’s court to grant us true, sincere, and perseverant servitude of Sultan-ul-Ashiqeen’s court. May Allah also grant us the ability to cover the path of Divine vision and closeness under his guidance by protecting ourselves from the poison of the worldly love. Ameen!

This article was published in Mahnama Sultan-ul-Faqr Lahore titled as حبِ دنیا ۔ زہرِ قاتل in the issue of April 2020. It was originally written by Anila Yasin Sarwari Qadri and is now translated in English by Sofia Sultan Sarwari Qadri. Translator has used American English vocabulary in the translation of this article. To read the original article, please visit: 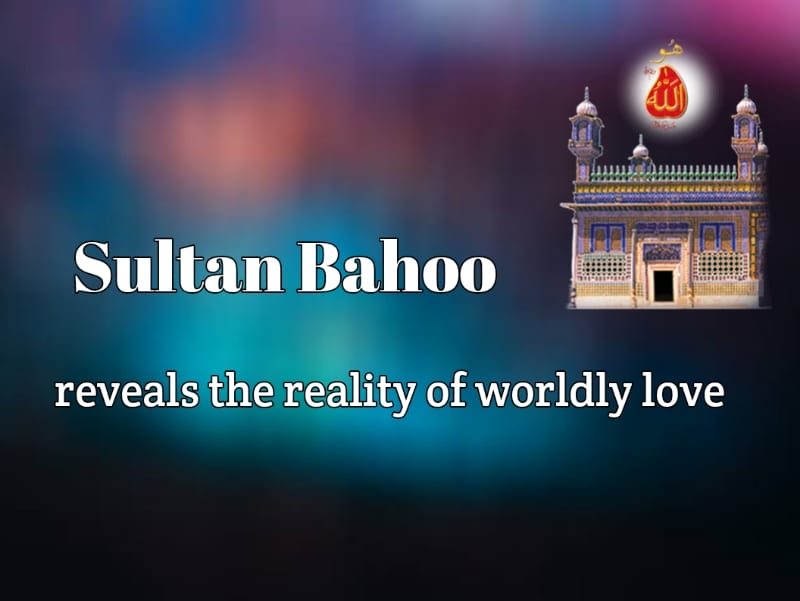