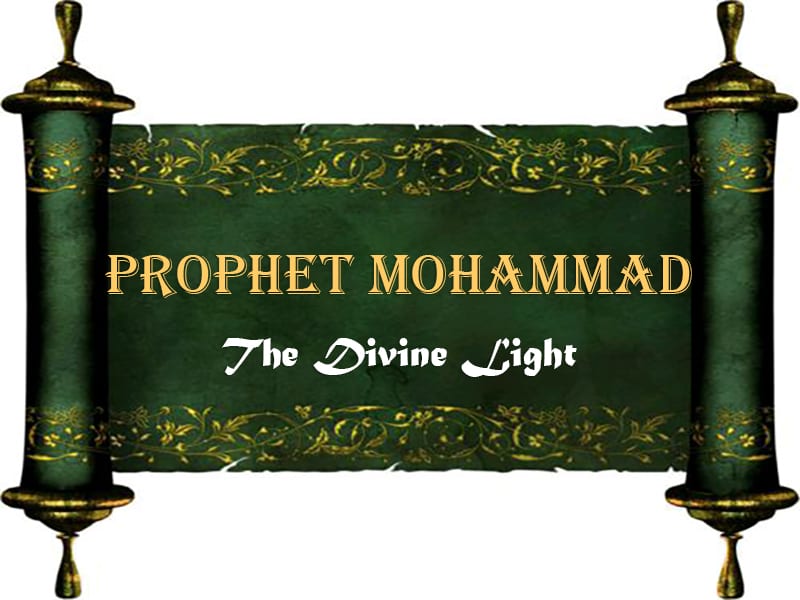 Before Prophet Mohammad (pbuh), the whole world betrayed, living the life of ignorance. They had no aim and moral values and rejected the straight path. Moreover, Arabs were divided in factions because of their internal fights. Not only they lacked unity rather they were enemy of each other. In addition, they had no aim in their life. In fact, they had no respect for each other. They were so divagated that they had rejected Allah and His Prophets. Allah says about them:

Meaning: And they simply do not have any knowledge of this (reality). They follow only their speculation and assumption. (Al-Jathiya: 24)

Allah has created the universe for His gnosis and Prophet Mohammad is His first manifestation. Jabir ibn Abdullah relates a tradition that the Holy Prophet said, “Before the creation of universe Allah manifested the light of Prophet Mohammad. At that time there was no soul, angels, earth, moon or sky but only Divine light (of Prophet Mohammad) existed.

Ghaus-ul-Azam Shaikh Abdul Qadir Jilani says in this regard:

Infact, all these refer to only one thing and that is the Mohammadan Reality, which is entitled as light. Because he is pure of the darkness of satanic attributes, as Allah says about Him:

Meaning: Undoubtedly there has come to you a light from Allah (i.e. Prophet Mohammad) and an enlightening Book (Al-Quran). (Al-Maidah-15)

Moreover, he is called ‘intellect’ because he encompasses all the knowledge. In addition, he is called ‘the Divine Pen’ because he is the medium to transfer the entire knowledge, as the pen is the medium to transfer knowledge in the world of words. Infact, all of these refer to the Mohammadan Reality because if he was not manifested nothing would have been created. (Sir’r-ul-Asrar)

As the following Qudsi Hadith tells, there would not have been existed anything, if Prophet Mohammad was not meant to be manifested.

Meaning: If it was not for you (O My beloved Mohammad) I would not have manifested My Lordship.

Meaning: If it was not for you (O My beloved) I would not have created the universe.

So, the light of Mohammad is the origin of the creation of all the creatures as well as of the souls of Momins (believers).

Believer is Manifestation of Prophet Mohammad

Holy Prophet said about believer as given below.

Meaning: I am from the light of Allah and all the believers are from my light.

Meaning: I am from the Noor of Allah and all the Momins are from me.

At this level, the manifestation of the Essence took place from Its layers of concealment or It inclined towards gross ampleness appearing from its Personal Exclusiveness. This is called as Zaat and it is called Haqeeqat-e-Mohammadiya or Mohammadan Reality because the Reality of Prophet Mohammad is  (Ahad) as it is said in the following Hadiths of the Holy Prophet:

Meaning: I am Ahmad  without M .

Meaning: Whoever saw me in fact he saw the Divine Reality.

Invocation of Allah and Prophet Mohammad

Infact, Allah Himself has exalted the name of His Prophet Mohammad. Therefore, it has become compulsory to remember his name along with Allah’s name.

Explanation: When someone invokes the name of Prophet Mohammad, Allah blesses him.

Only Prophet Mohammad is perfect in this universe. Therefore, he is a perfect father, perfect businessman, perfect teacher and a perfect spiritual guide. Moreover, he is also an ideal as far as the human rights are concerned.

Blessing for all Realms

Infact, Allah has made His Prophet a blessing for all the realms and creations. Moreover, he brought the message of Allah towards His creation. In addition, his guidance is so comprehensive that guides every rich and poor, common and elite, king and slave. Thus, his obedience is Allah’s obedience which leads to gnosis of Allah. In Quran, Allah has declared His Hand as Prophet Mohammad’s hand. Allah says:

Infact, no Prophet or Messenger got treasure of Faqr but Mohammad. He transferred this treasure as a trust to his spiritual descendants when he had left this mortal world.

Through many mediums this Trust reached Sultan Bahoo. Sultan Bahoo transferred it to his spiritual descendants and now it has reached to Sultan ul Ashiqeen Sultan Mohammad Najib ur Rehman who is the present Shaikh of the Sarwari Qadri order.

It is an Urdu article of the magazine “Mahnama Sultan-ul-Faqr Lahore” for the month of Nov ember 2019.  Originally Mrs Maimoona Asad Sarwari Qadri has penned it and presently translated in English by Mohammad Abdullah Sarwari Qadri exclusively for the website. Do not forget to visit the original article to which you only have to click the link