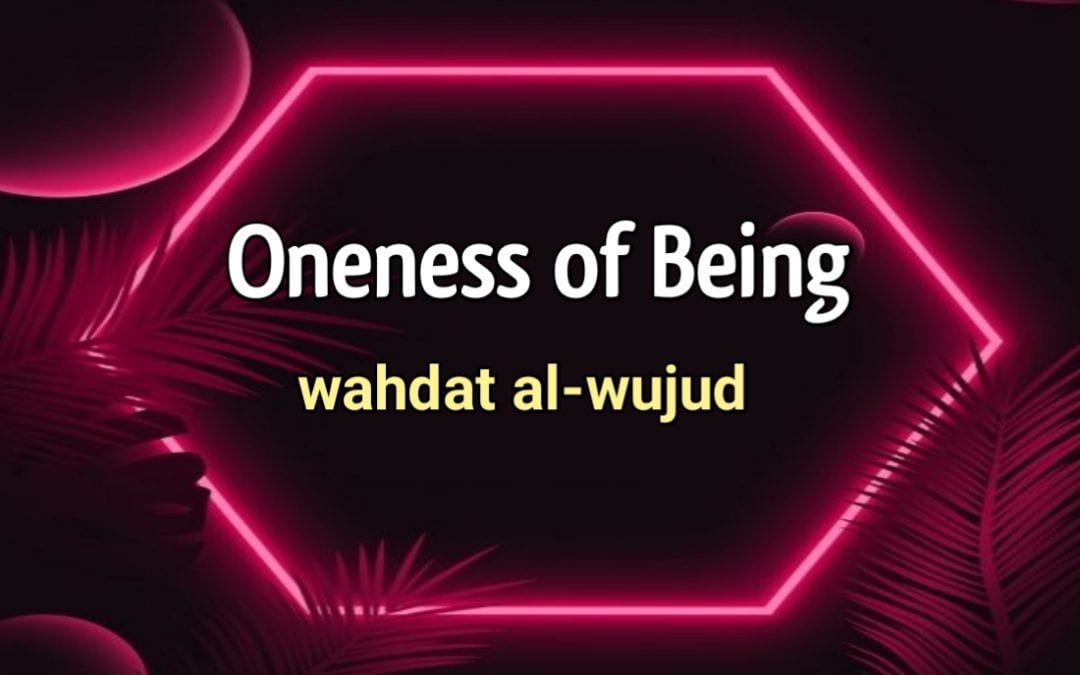 All praises are for Allah Who created everything and Who is the light of the heavens, the earth, every creation and realms.

According to a Qudsi Hadith:

Meaning: I was a hidden Treasure, I intended to be recognized so I created the creation.

Meaning: The Fountain Head and Eye of the Reality of Incomparable and Unknowable realm (HaHooiyat).

The Sufis describe the levels or stages of Divine descent with reference to each word of the said Hadith as:

It is the world beyond all the worlds and station beyond all the stations. Moreover one even cannot call it a ‘world’ or ‘station’. Here Allah is All Alone and hidden in His Own veil and no one can understand the Essence of Allah at this level. Also nothing related to the creation can reach here as it is the point of non-creation. Here Allah is as the verse states:

A Hadith also points to the same:

Meaning: Allah was (Alone) and nothing was with Him.

Most importantly in this realm He has not revealed or manifested His Essence and any of His attributes. Prophet Mohammad (peace be upon him) said about this level:

Meaning: Think about the signs of Allah not the Essence.

Sultan Bahoo says about this level:

“To understand the quiddity of the Divine Essence countless efforts of wisdom went in vain.” (Risala Roohi Sharif)

In addition this is the transcendent level of Essence which is beyond anybody’s intellect, knowledge and frame of reference. For the ease of understanding the Essence of Allah is called Hoo (ھُو) at this level.

In this realm the Divine Essence manifested in the form of light of Mohammad and it is the first step towards Divine descent. In fact the said light is not a creation rather it is ‘the Treasure’ that was hidden in Essence and was eager to manifest. Hence it is the Mohammadan Reality and following Hadiths points towards the same:

Meaning: First of all Allah manifested my light.

Meaning: I am from the light of Allah and all the creation is from my light.

Meaning: First of all Allah manifested my soul.

Sultan Bahoo says about this level:

“Know! When the Divine light of Ahad (the One – Attributive name of Allah) coming out of His isolated Oneness intended to manifest Himself in multiplicity, He graced (all the worlds) with the theophany of His splendid sight of the pure Divine beauty. Both the worlds started burning like a moth on the candle of His blazing beauty concealed in the veil of ‘M’ of Ahmad (Prophet Mohammad) manifested Himself as Ahmad.” (Risala Roohi Sharif)

Meaning: If it was not for you (O My beloved Mohammad) I would not have manifested My Lordship.

The Realm of Divinity (Alam al-LaHoot)

It is the third step and the second level of descent. At this level in the Mohammadan light is the whole universe and all the creation as a unit and is eager to manifest. Specifically it is the level where the soul of Prophet Mohammad manifested from the Mohammadan light. It must be remembered that this purest soul is the Divine soul and the Trust granted by Allah. Therefore Allama Iqbal points towards it in the following verses:

Explanation: O Divine soul! Avoid the sustenance that may hinder your flight (towards the realm of Divinity).

The Realm of Power (Alam al-Jabarut)

This is the fourth step and the third level of descent. Here the kingly soul was created from the Divine soul and it has the qualities and attributes of angels because both were created at the same level. Additionally this realm acts like a bridge and is a source of connection between Prophets and Allah.

The Realm of Angels (Alam al-Malakut)

The fifth step is the fourth level of descent of the Essence. Before this level the soul had no form but it took a recognizable form for the first time. However there is no restriction for the soul to take any particular form and it can appear in any from or shape though all these are immaterial, symbolic and intangible. Also they cannot be touched, captured, torn or patched and are immaterial like ideas, thoughts or feelings. Dreams are from this world.

It is the sixth step and the fifth level. Thus Allah manifested Himself in the physical world descending from the realm of Incomparable and Unknowable. However, the Divine descent does not mean that Allah descended in this world and is not present in other worlds. He is Omnipresent. Every world is His world. He is here as well as everywhere.

The seventh step and the sixth level contains all the levels. Sultan Bahoo says:

“Allah be Glorified! He has manifested the signs of Divine beauty and majesty of His perfect nature through thousands of earthen elemental bodies that are His perfect manifestations. Moreover, by making them pure and sanctified mirrors, He is observing His Own beautiful countenance. In fact He is experiencing His Own love. He Himself is the Sight, the Beholder and the Beheld. To enumerate He is the Love, the Lover and the Beloved and if you remove the veil from yourself you will find the only One Entity that exists. Therefore the duality (the variety of material things) you see is due the lack of your (spiritual) insight.” (Risala Roohi Sharif)

Meaning: (O My beloved!) Everything in the heavens and the earth has been made subservient to you.”

Oneness of Allah (tauheed) is the basic pillar of Islam. For a common Muslim it is quite simple and easy but Fakirs and Mystics find great depth and profoundness in its meanings. For the masses first part of shahada is merely the proclamation of Oneness of Allah which means, “There is no God but Allah.” He has no partners and is Alone. He deserves all praise and adoration. He is the Creator and the Master.

On the other hand the interpretation of Sufis, Fakirs and Mystics consists of so many implications and graveness which at times overwhelm the scholars and theologians with admiration while at times they simply pass religious verdicts of paganism and heresy.

‘There is no God but Allah’ is negation as well as affirmation. It is quite true that He is the One God but if He is the One God then what is the need to negate any other? In the presence of One there cannot be another. If there is no one like Him or He has no partner, He is incomparable and unprecedented then the very concept of any other ‘god’ is only meaningless. ‘There is no God but Allah’ actually means that there is no one but Allah. If there is only He then what is all that we see around?

Two theories are widely found in this regard which are:

The Oneness of Being (Wahdah al-Wujud)

First of all Husayn ibn Ali presented this theory in his book Mirat-ul-Arifeen. This is the very first writing on the theory of Oneness of Being which is in fact the interpretation of sura al-Fatihah. He wrote it as an answer to his son Ali ibn Husayn Zayn al-Abidin. Not only did Husayn ibn Ali write the interpretation of Oneness of Being but also established the term al-Insan al-Kamil (the Universal Divine Man).

The Mystics are all mutually consented on the point that whatever books on the Oneness of Allah (tauheed) are published till now are only the exegesis of Mirat-ul-Arifeen. Then Shaikh Abu Saeed Mubarak Makhzoomi the spiritual guide of Shaikh Abdul Qadir Jilani described the Oneness of Being and Sufi cosmology in detail in his book Tohfa Mursala Sharif but this theory received popularity due to the writings of Shaikh al-Akbar Mohiyuddin ibn Arabi. He explained the term al-Insan al-Kamil very comprehensively and elaborated this doctrine so explicitly that there remained no need to write about it anymore.

Prior to understanding the concept of Oneness of Being, it is essential to comprehend the theories of transmigration (Halul حلول) and alliance (Itehad اتحاد). Dual beings are essentially required in transmigration and alliance but according to the theory of Oneness of Being actual Existence is only one and that is the Divine Truth. To slander the unitarian for being a transmigrator or theory of alliance theory is utterly an ignorance and nonsense.

Shahabuddin Suhrawardi has explained Wahdah ash-Shuhud or Oneness of witnessing which is the gnosis of attributes.  He called Divine Essence as the Absolute light according to the verse:

Meaning: Allah is the light of the heavens and the earth. (An-Nur 35)

Difference between both doctrines

One can truly understand the concepts of Oneness (tauheed) and Wahdat al-Wujud if innerself (an-nafs) has been purified by joining the company of the perfect and accomplished spiritual guide. He grants the seeker gnosis and proximity of Allah ultimately blessing with actually experiencing it.

The present leader of Sarwari Qadri order and the perfect spiritual guide is Sultan-ul-Ashiqeen Sultan Mohammad Najib-ur-Rehman. On the first day of pledging allegiance (al-bayah) he grants the invocation and contemplation of Ism-e-Allah Zaat.  The invocation and contemplation of Ism-e-Allah Zaat and the beneficence of the effective spiritual sight of Sultan-ul-Ashiqeen removes the veils of innerself leading a seeker of Allah towards Oneness (tauheed) and observing of Oneness of Being. Open invitation to everyone to join his company to not only enlighten the inward and the soul but to experience Oneness. May Allah grant us with His favour! Amin.

This blog is English translation of an Urdu article of the magazine ‘Mahnama Sultan-ul-Faqr Lahore’ for the month of January, 2020. The title of the Urdu article is:

This article is extracted from Sultan-ul-Ashiqeen Sultan Mohammad Najib-ur-Rehman’s Urdu book Shams-ul-Fuqara which is translated in English by Sahibzadi Muneeza Najib Sarwari Qadri exclusively for the website. Do not forget to visit the original article to which you only have to click the link